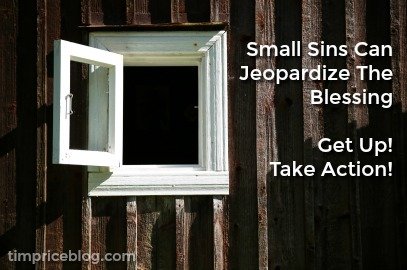 The crazy thing happens just one chapter after the miraculous and famous fall of Jericho. In the process of that miraculous conquest, someone among the Israelite nation, unbeknownst to anyone else, disobeys the direct orders from God and steals for himself some of the plunder.  He takes a robe and money that he covets and hides them in his tent.

Soon after, without realizing this had happened, Joshua sends spies to another city of people who are inhabiting the promised land that belongs to God’s people. The spies come back to report, in confidence, that the town of Ai will be a simple victory and would only need a small army, maybe a couple thousand guys.

But because of the disobedience of this one man, Achan’s sin of disobeying God, the Israelite nation loses their blessing and anointing and they fall to the city of Ai.  Their men are soundly defeated and they retreat, losing 36 warriors as they come down the mountain.

Joshua is beside himself. First of all, he can’t believe they lost – they have had an unbelievable string of victories over the last few months!  The Lord has led them, been faithful and called them to go.  In addition, their strength lied in God – people in other cities weren’t afraid of the tactics of this nation, they were afraid of their success, their reputation, and the power of the God who led them. Without this, they were nothing.

Now Joshua feared they had lost the anointing.

CONNECTION OF HOLINESS AND BLESSING

Continuing the story from Joshua chapter 7, Joshua and the elders began to pray earnestly.  They tore their clothes, put dust on their heads, and bowed in a face-down posture in front of the Ark of the Covenant until evening. They spent the day in relentless and heartfelt prayer. They were desperate.

ANSWERED PRAYER – GET UP!

And then something amazing happened.  The Lord answered their prayer.  He said, “Get Up!  Why are you down on your face like this!  It’s simple really.  Israel has sinned and broken My covenant.  They have stolen things that I commanded must be set up apart. Not only was it stolen, but it was also lied about.  This is why you are running in defeat.”

Every once in a while, we need a jolt. We need a wake-up moment.  It’s easy to get comfortable. God’s heart isn’t to destroy people – in some ways, we do that ourselves.  His heart is for His children to know the freedom that comes from living in the bounds of God’s word.  In His presence and holiness, we find true freedom.

And while the leaders are praying, God interrupts them with this answer.  “Get up. You’re done praying now.  You need to move into action.  You need to rid this sin today. Now.  Follow these specific instructions for figuring out who stole the items and who has lied about it.  Once this is resolved, you will have My blessing again.”

So, they go through the process of bringing before the Lord each tribe, each clan, each family and it eventually is pinpointed down to Achan, who didn’t seem to think it was possible that all this would stem from taking just a small portion of what God commanded not to.

What Achan failed to understand is that the Lord doesn’t really need the robe and 200 shekels of silver, He needs Achan’s heart and obedience.  He needs the covenant to remain intact.  He wants his people to know Him and obey Him.

They pinpoint Achan, go to his tent, recover the stolen goods and he (along with his entire family) was punished because of his sin.

How much of a role do we have in getting rid of the sin of our lives?  We need to repent. Only God can forgive and redeem. But what part do we play in actively rooting out sin that is deep within us?  Are actions needed to get rid of sin drastic? There is a link between unconfessed sin in our lives and blessings. It affects us, our families and everyone around us.

God’s Call: Quiet, But Not Small