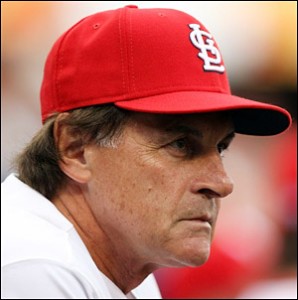 Every so often a 5 tool player comes around – someone who can do it all – hit, field, catch, run, etc.  But for the most part, even in the pros, the best you get is the everyday, average  2-3 tool player.  One commentator I heard made the point that most games are won by positioning the everyday 2-3 tool players in the right places.  LaRusa was a master at this.

Several ideas come to mind in light of this concept.  It’s encouraging to think, even though we already know it, that success comes from each of us playing our part on a team.  You don’t have to be a star to make an impact, you just have to allow your gifts to be utilized toward a specific end.

As far as team ministry goes, there is something to be said for confidence to make the move.  As a team is developed, changed and redeveloped over and over – giftedness for a specific area might emerge.  A high priority ought to be placed on putting  people where they need to be for the sake of the team.  How do you go about making that change? I’ll offer three suggestions:  1) Practice finding the best in people – where do they shine and what are their gifts and strong points? Know this about each team member.  2)  As the leader, speak the words out loud.  Let you team members in on your thoughts – what have you noticed about them and their strengths? Someone has to be in  charge of developing and deploying the team and the gifts of the team.  3)  Help your team strategize. Obviously, in a perfect world, each team member’s gifts would line up with the role they are serving in.  If that’s not the case, help them strategize.  Find ways for them to delegate for the purpose of opening some time to accomplish the areas in which they are motivated, gifted, needed.

I think part of the confidence to help put everyday 2-3 tool players into the right places comes from a vision for the outcome – winning.  What does it take to win? How can you best arrange your resources (the largest one for almost any organization being people) to accomplish the goal?  That’s our task.

Be encouraged – The World Series Championship Team isn’t made up of all stars.  It’s made up of several team members who are pretty good at some specific thing.  If you are managing such a team, don’t give up.  Keep having fun putting the pieces together, arranging and re-arranging until you all become effective.