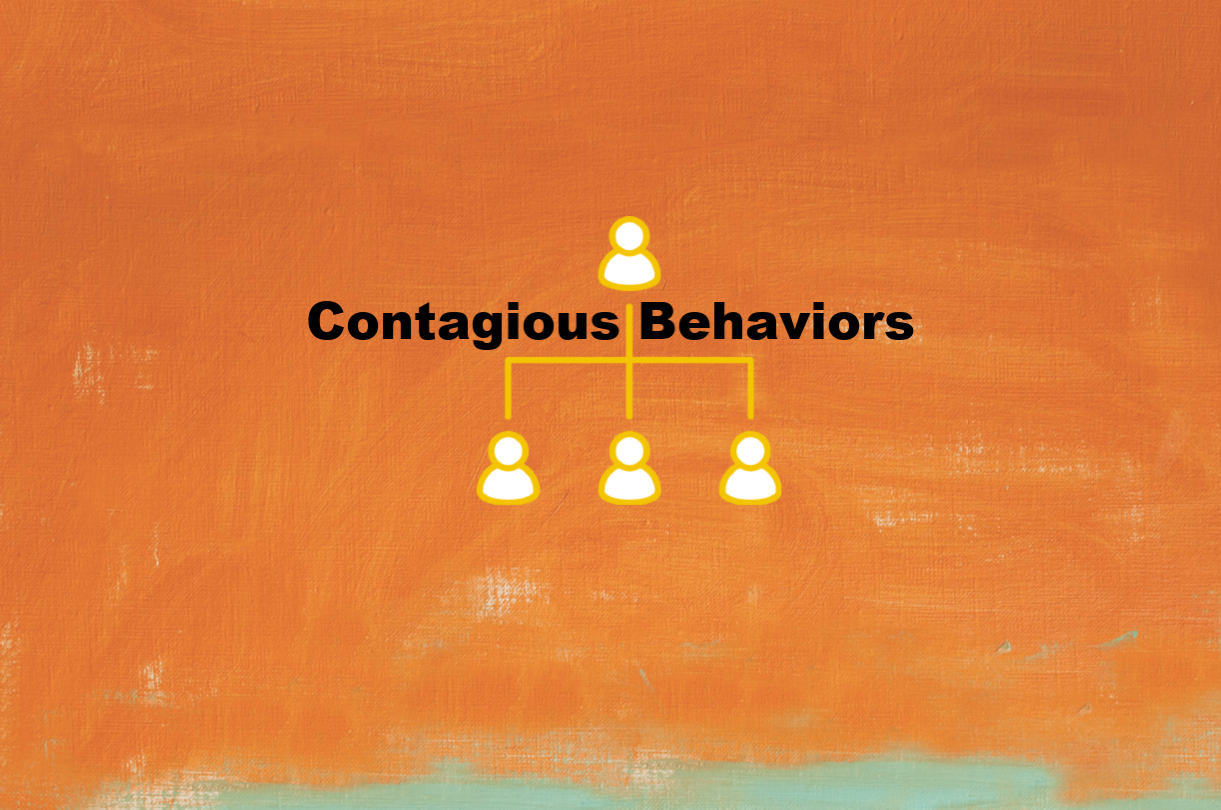 It’s been said that you are the sum of the five people closest to you. It’s the reason we so desperately want our kids to choose their friends wisely. We’ve all seen the dramatic effects of teenagers getting in with the wrong crowd. But it’s not just teenagers; it’s all of us.

In his book, “Before You Knew It: The Reasons We Do What We Do,” John Bargh spells out fascinating reasons for our behavior, divided into three sections: our past, present, and future. The present section is: What We See Is What We Do.

Couples who have been married for decades have similarities in their physical appearance because they have witnessed each other’s facial expressions for years. They share each other’s emotions from shared life events and in many ways mimic the facial muscles and response to those moments.

In study after study, our behaviors mimic those around us. In one study, half the people were primed (given a word, image or example, unbeknownst to them, about being helpful and kind) and half were not. Amazingly, the group that had been primed were more likely to pick up a pen for someone than those who hadn’t been primed. The opposite works too.

If you are constantly in an environment where people are rude and negative, you’re likely to begin seeing and experiencing life negatively. An aggressive, belittling-subordinates-type of behavior can spread through an office or work environment like wildfire. Often, workers won’t even be cognizant of their own behavior because it’s so commonplace in the culture.

You can be influenced by who you watch on TV, how your friends behave, and who influences your friends. In one study, researchers found a link between degrees of separation (you may not know someone directly, but a friend of yours does). They found that people’s attitudes were connected to attitudes of people they didn’t know personally. If one was depressed, a high number of that person’s family and friends were also depressed. This also worked for obesity.

This idea of contagious behaviors is why the proverbial apple rarely “falls far from the tree” in parenting. How many times have parents joked, “do as I say, not as a do!” It’s nearly impossible for a child to do anything different than the parent. From the discipline of completing chores to how much and what to eat, our attitudes are contagious.

This is one reason my family never has alcohol in our home nor orders it out. It is well documented that some people’s genes are more prone to become addicted to drinking than others. Since there’s no way to predict this in children, modeling abstinence from alcohol is one of the best things you can do for your children. I’ve noticed how many actors, musicians, and other artists wind up in rehab or die from overdosing. Music, creativity, and art may be linked to that more addictive gene. I would hate for generations of kids in my musical and creative family to see their family drink alcohol and wind up as a statistic later in life. So without any judgment on anyone, we never drink alcohol for any reason. I find our family to be content, happy, and quite fun.

Being around Christians is a huge boost to how other believers behave. Immersing ourselves in camps and conferences helps us practice living out the disciplines and behaviors of the Christian life. Being at church with other believers helps us remember the kindness, gentleness, and faithfulness of followers of Jesus. Face to face community with others is the best way to be formed into disciples.

Mark Oestreicher speaks about this in light of today’s teen. For years the method for connection was Believe (the right things), Behave (the right way), and then Belong. Now, many students need to Belong (to something), try on Behaviors (of the group they belong to), and then begin to Believe.

The book also discusses how behaviors are contagious on social media (page 201). Since the average person has more than 300 Facebook friends, the capacity for our own moods, attitudes, and behaviors to be altered by what we see is absolutely staggering! Researchers worked with Facebook to allow only negative or positive information to come through the news feed for a test sample of users during an allotted time. The users seeing only negative information began posting negative comments and information. The users seeing only positive information began posting positive comments and information. Wouldn’t it be nice to be able to click a “positive only” box on your Facebook news feed?

Everything we read on social media affects us. I’ve experienced this myself in conscious and subconscious ways. One time, I saw a meme about people neatly and evenly positioning eggs in a pattern before returning a half-used egg carton to the fridge. As a joke, I made sure to use the four center eggs first. Now five years later, it’s part of who I am; I always arrange the leftover eggs in the carton.

Give it a try. Do something positive today around your family and friends and see what happens. If you lead a church, organization, or company, model a behavior that spurs new attitudes and culture. Do something in your home to create new behaviors to adopt and live by.

Be aware of who you are watching, spending time with, and listening to. You will become more like them.

Here’s a link to the book if you’re interested!