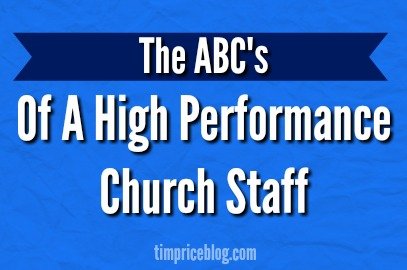 The church staff team is unique. Mostly self motivated and in many ways, self directed, church staff teams have overarching goals to aid in the mission of the church, but team members typically wear many hats. They have a heart to see the church grow, but it’s easy to fall into a culture of being stuck.

Though it’s tough at times to insert performance measures in church staff leadership, I don’t think it should be thrown out.  We should be as diligent and faithful as we can be in serving in the ministry areas we are called to lead.

In one of Ken Blanchard’s older books called Whale Done! The Power Of Positive Relationships, he breaks down the ABC’s of performance. If you are leading teams, this simple process may be helpful to you.

The activator is the ingredient that gets the ball rolling. This may be a new thought or idea, a great experience in another organization, a reprimand, a critique from a trusted friend or a new set of instructions for accomplishing something.  Most often, when working with your team, a good example of an Activator is goals.

One good way to see if your goals are clearly stated and defined is to ask the boss or leader to write down his or her goals for their subordinates and to ask those on the team to write down what they believe their goals are.  How similar would these be?

Setting clear goals is crucial to movement, motivation and achievement.

After setting clear goals to motivate performance, a leader must take note of the behavior that follows. This isn’t micromanaging; it’s actively supporting the work.  You are helping your team experience the reward of working toward the goals and winning.  We don’t want our team to only work because there will be verbal praise or some other response, but because they see the inherent value in accomplishing the work.  However, to begin with, a leader must take note of the behavior to see if it lines up with the goals, which leads us to the C.

Too often, leaders will set goals, then disappear. After getting the A  ctivator in place and then observing behavior, the final step toward great performance is the consequence. What will happen as a result of what you observed. Blanchard says one of four things: a) No Response b) Negative Response c) Redirection d) Positive Response. The first two are most common in teams. Either there is no response or it’s negative. This is one of the key elements Pat Lencioni speaks about in 3 Signs of a Miserable Job.  A person has to know that someone knows they are working hard. Without that recognition, it’s difficult to stay motivated.

The final two options are most powerful, but rarely utilized. You can’t just ignore low performance, but you can redirect your team members toward solid work. You can provide positive response on both jobs well done and on small steps in the right direction.  Catching people doing something wrong is easy.  It’s much more difficult catching people doing right.

Here are some thoughts for busy pastors and church leaders leading staff:

You have an incredible opportunity to lead the overall church by investing in the staff team. However, the task can become overwhelming. It’s easy to get fired up about motivating and aligning the team, but then dropping the ball after the initial Activator. Set goals, a simple step toward achieving more through the leadership structure of your ministry, then commit to investing a percentage of your time to help bring them to fruition.

Your church and your team already have a culture, it’s the second step that will help change a culture for the better. We’re not mirco managing people – we turn them loose to do their work, but we offer our insight and praise as the process unfolds. Typically, kind pastoral leaders will be unable to be frank in their response. The response either leans toward no response or undeserved praise. If this is tough for you, think of it as a process of helping to develop your team for a future ministry in another setting. This will help give you the motivation you need to do say the hard things at times. [Read: Develop a Culture of Comfortable Criticism]

Build in a weekly ritual to help raise the expectation of leadership, give feedback and encourage your team. This doesn’t have to be fancy, a meeting, a lunch or even a regular email. And even if you don’t get a regular routine worked out right away, use these three simple ABC’s on the next project or assignment in which you specifically call a staff member to help or lead.

Here’s a link to the book if you would to pick up a copy. It’s an entertaining, quick book to read.

Pastors: Why You Should Talk About Leadership At Every Staff Meeting

How To Find Time To Develop Church Staff in Leadership