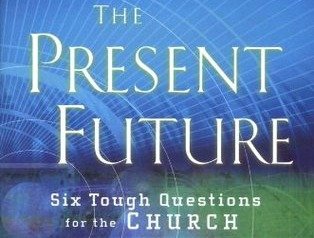 I just finished reading The Present Future: Six Tough Questions for the Church

, by Reggie McNeal, almost a prediction for the church.  Written a few years back, it’s packed with interesting thoughts regarding tough questions the church needs to ask and answer in order to keep being effective in North America over the next century.  Here are some of the quotes:

“Vision is discovered, not invented.”

“Church activity is a poor substitute for genuine spiritual vitality.”

“Just when the church adopted a business model, the culture went looking for God.”

“In the new world, the place of learning has shifted from the classroom to the living room.”

“The local church has more Sunday School space than it needs and it’s already being paid for.  It’s called home mortgages.”

“Churches are so busy getting people involved at the church that they’ve neglected this fundamental agenda of spiritual formation.”

“The best approach to future ministry involves prayer and preparation, not prediction and planning.”

“This is what life in the church bubble can do to you. It shrink-wraps your vision down to the size of your church.”

“The movement Jesus initiated had power because it had at its core a personal life-transforming experience.”

“To save itself the church must practice radical obedience to an ancient command, [experience] a loss of self rather than self-preoccupation, concern about service and sacrifice rather than about style.”

“Spiritual formation prepares people to say yes to God’s direction and this allows God’s people to have their hearts captured by his heart.”

“Seminary curriculum is designed primarily to address skill sets for leadership functions other than the apostolic type.” Instead, leaders must target the community beyond the church walls. To facilitate this leaders are called to be leader-missionaries who know how to establish and conduct conversations about Jesus and the gospel with people in the workplace, etc.

“We will see more and more people, in the church and out, who have the call, the ability, and the finances to resource their own ministry passions in the community. They will not wait for the church to catch up. One clear generational distinction of the millennials (born 1983-2000) is a renewed civic consciousness. As this generational cohort matures, the Christians in it will be much more likely to volunteer and write checks for ministries’ and missions’ actions that make a difference in people’s lives where they live.”

“The current church culture in North America is on life support. It is living off the work, money, and energy of previous generations from a previous world order. The plug will be pulled either when the money runs out (80 percent of money given to congregations comes from people aged fifty-five and older) or when the remaining three-fourths of a generation who are institutional loyalists die off or both.”

“What about retention rates? 90 percent of kids active in high school youth groups do not go to church by the time they are sophomores in college. One-third of these will never return. This rate of disconnection indicates a dilemma far more serious than mere youthful rebellion.”

“Having retreated into a diminishing corner for several hundreds of years, the North American church culture unfortunately now reflects the materialism and secularism of the modern era.”

“Not only do we not need God to explain the universe, we don’t need God to operate the church. Many operate like giant machines, with church leaders serving as mechanics. God doesn’t have to show up to get done what’s being done. The culture does not want the powerless God of the modern church.”

“Trouble is, we don’t have much evidence to support the assumption that all this church activity has produced more mature followers of Jesus. It has produced many tired, burned-out members who find that their lives mimic the lives and dilemmas of people in the culture who don’t pay all the church rent.”

“Those with a refuge mentality view the world outside the church as the enemy. Their answer is to live inside the bubble in a Christian subculture complete with its own entertainment industry. Evangelism in this worldview is about churching the unchurched, not connecting people to Jesus.”

“It focuses on cleaning people up, changing their behavior so Christians (translation: church people) can be more comfortable around them. Refuge churches evidence enormous self-preoccupation.”

“People are not looking for a great church. They do not wake up every day wondering what church they can make successful. The age in which institutional religion holds appeal is passing away—and in a hurry.”

“Church leaders seem unable to grasp this simple implication of the new world—people outside the church think church is for church people, not for them.”

“We may have saturated the market of people who want to be a part of the church culture, who want church the way we do it in North America.”

“At Sinai, God delivered an assignment to his people. They were to tell the whole world about God and convince the world of his love for them. Unfortunately, Israel never quite grasped that their “chosen” status was for the sake of the mission. It incurred responsibility, not just secured the enjoyment of privileged position.”

“The North American church is suffering from severe mission amnesia. It has forgotten why it exists. The church was created to be the people of God to join him in his redemptive mission in the world. The church was never intended to exist for itself.”

“The correct response, then, to the collapse of the church culture is not to try to become better at doing church. This only feeds the problem and hastens the church’s decline through its disconnect from the larger culture. The need is not for a methodological fix. The need is for a missional fix.”

“Under the all-growth-is-good mantra, some unscrupulous and spiritually suspect methodologies have been employed to “get the numbers up.” The rise of the celebrity-status church culture (not the child of the church growth movement, but a development of a church culture parallel to American pop culture) has created thousands of “losers,” pastors and church leaders who are not serving in high-profile, high-growth churches. Consequently, a large part of the leadership of the North American church suffers from debilitation and even depression fostered by a lack of significance. The army of God has a lot of demoralized leaders.”

“The Pharisees were monoculturalists (all religious fanatics are). Monoculturalism does not embrace kingdom growth, because it insists that people conform to a cultural standard in order to gain admittance to the religious club.”

“Jesus’ strategy was to go where people were already hanging out. This is why he went to weddings, parties, and religious feast day celebrations.”

“Turning members into ministers hasn’t worked for another reason. Church members don’t want to do what they see many ministers doing. On the one hand, when they see ministers being where the action is, helping people, turning lives around, partnering with God’s work in the world, they line up. On the other hand, too many church members view clergy as professional ministers who have been cranked out by the church industry to manage church stuff. They have not been exposed to church leaders who are leaders of a movement. Instead, they are familiar only with institutional managers.”

“There’s no way I would do what you do, putting up with the complaints of church members.” What does this tell you? Many laypeople see ministers’ roles as the complaint department for disgruntled club members who want to be catered to. Church members who want to live missional lives don’t want to be captured by the same concerns of club members that tie up their staff ministers.”

“Laypeople see the disconnect in the “every member a minister” strategy. They are voting by not lending their time, energy, and money to ministry “vision” that has the church as the primary beneficiary or recipient. Church has become increasingly irrelevant to their workaday and home lives. Church ministry to them is an add-on activity to an already crowded life. They wonder why God can’t use them where he has already embedded them—in their homes, workplaces, schools, and communities.”

“The point is not to adopt the culture and lose the message; the point is to understand the culture so we can build bridges to it for the sake of gaining a hearing for the gospel of Jesus.”

“Instead of dumping a packet of church club member stuff on them, why not interview them about what they would like to see happen in their lives in terms of their spiritual development and personal growth?”

“Helping people grow, particularly in the arena of spiritual formation, is about unpacking life: challenging our emotional responses that are destructive (envy, hatred, bitterness); challenging our biases (racial prejudice, social and economic elitism, intellectual snobbery); challenging our assumptions (“my needs are the most important”); challenging our responses; unpacking our frustrations, our hopes, our dreams, and our disappointments; bringing life to God rather than teaching about God, somehow hoping to get him into our life.”

If you’re interested, Pick up a copy of The Present Future: Six Tough Questions for the Church on Amazon!

The Importance of a Leader’s Funny Bone