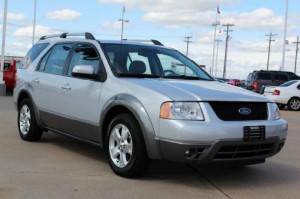 Throughout my life, I’ve owned used cars  and have had pretty good results. Our current car is one of two exceptions.  We purchased this car new back in 2005.  It’s been affectionately named Buttercup.

Before our current car, I had a long series of other cars.  I once owned an 1985 Escort (as did everyone else I knew at the time, it seemed).  It was great for a while, but eventually, the door could only be opened from the outside, among many other issues.  That worked well until one winter my window had frozen shut and when I finally got the window down, it wouldn’t go back up.  I could tell a million stories about that car.

On another occasion, my dad and I both bought a used car the same night.  This was before the cell phone era.  We both thought we had found too good of a deal to pass up – but we were in different towns, making different deals.  When we finally connected, we had both purchased a car for me to drive!

As a child, I have lots of funny car memories too.  I don’t remember who it was – either my mom or dad or one of my brothers – accidentally touched a chocolate ice cream cone to the ceiling of  a car we had.  I laughed so hard that day.  It was a “you had to be there” kind of moment, I’m sure.  But the little ice cream spot was on our car forever.

Cars provide memories and it seems the quirkier they are, the more memories they provide.

Back to Buttercup.  The other day was beautiful as my daughter and I stopped by the hardware store to return something.  We left the windows down in our car out in the parking lot.  On the way out, for whatever reason, my eight year old daughter ran to the back door and jumped in through the window. Instead of entering through the door, she crawled in Dukes of Hazzard style!  I laughed.  She laughed.  To my knowledge, she had never done that before.  Of all that things that happened in our lives that day – the one small moment of her entering the car through the window was the topic of conversation that evening.  Had it been a brand new car, she probably would have gotten in trouble.

Older cars seem to create stories and memories.  I once heard that Enterprise did some research to discover that the optimal time to purchase a car is when it has 44,000 miles on it.  I also remember once taking a financial class at church where the leader shared that the best car to own is the one you have now.  Keep your car as long as you can.

I think that makes sense for both money and memories.

12 Things every church ought to know about their community

The smell of “old” in worship