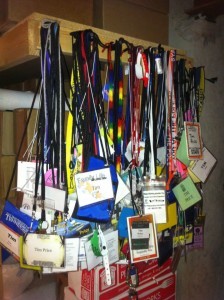 I’ve always been a keeper.  And though I haven’t kept all of them, these are the nametage I have hanging on a shelf in the basement.  This collection is from several years of conferences, retreat and events.  And it doesn’t count the events where the nametags were stickers.

I’ve showed many people this collection.  It represents many hours of being involved in ministry at special events. Lots of memories.

I know this isn’t earth shattering or anything, but here are few thoughts about nametags:

1) Nametags put everyone at the same level right off the bat.  The speaker, the band, the volunteers, the students, the participants all put on a nametag – we’re equal.

2) Nametags say, “we were expecting you.”  When someone doesn’t have a nametag, which often happens due to last minute changes, it’s a jolt.

3) Nametags open the door for conversations, connections and belonging. All people have is their name when they enter a conference or event.  Through their name, doors are opened up.  Conversations begin.  Connections are made.  Often the nametag will open doors about towns, cities, churches, and it makes it easier for anyone to engage.

4) Nametags can be annoying – which is a common connector.  The herd mentality during a conference weekend can be quite comical at times.  And when it comes to pinning on a nametag or wearing a string nametag, there is a common bond with people – even if on the negative side.

5) Nametags build community – I was in Washington DC this summer and happened to run into a youth group I knew from our home area.  They were attending another conference and because of their nametags, I began to talking with them.  What a small world.  It’s also happens while staying at a motel during a conference weekend event and you see a group get on or off the elevator and realize they are with you – even though there were way to many people  at the conference to meet all of them individually.

The art of remembering names

Four things I pay attention to when developing a conference weekend

Why large events will always be part of the church