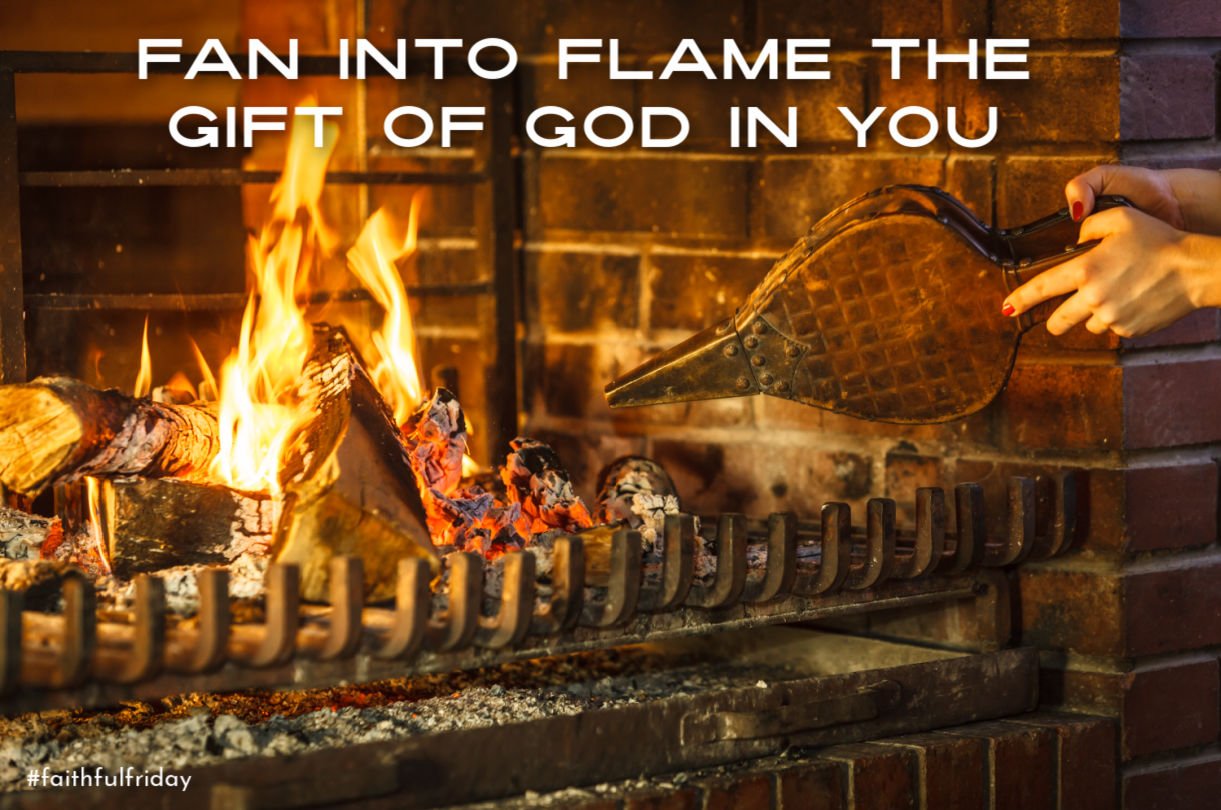 Timothy, to whom two New Testament letters were directed, was born around the year AD 17 and died about AD 97 when he was about 80 years old.

Though he never physically met Jesus, their timelines overlapped. Jesus was born around 4 BC, started preaching around AD 27, and died around AD 30. Timothy was a ten-year-old when Jesus began his three-year earthly ministry.

It’s possible that Timothy heard Paul speak or heard stories of Paul when he was 17 years old. Paul’s conversion happened in AD 33 or 34.

Timothy was equipped, encouraged, and mentored by Paul in two New Testament letters. He was also mentioned several as an active member of the missionary team with Paul, Silas, and Titus.

I think it’s awesome that Paul encouraged Timothy to Fan Into Flame the gift of God which was in him. He invited him to take action, to be an active participant while God is at work in his life.

For this reason, I remind you to fan into flame the gift of God, which is in you through the laying on of my hands.

We may think it audacious to try and fan into flame our gift…. isn’t that’s God’s job? But Paul encourages Timothy to fan into flame his gift… to develop it!

It’s a reminder that we have a part to play – fanning into flame.

Through Scripture, we see Jesus call his disciples to be obedient in everyday things – finding lunch for the crowd, untying the donkey before heading into Jerusalem, and other stories. These simple acts of obedience produced big miracles and the disciples’ hearts were slowly coming around! Their obedience to Jesus’ invitation was flame fanning! They were learning and experiencing.

For mature Christians, you have an obligation to help the next generation learn to fan into flame and you can encourage it. Much like Paul did for Timothy, challenge, teach and encourage those in your circles to grow in their gifts.

What gifts can you use for your ministry? God can use anything! What do you have to offer? What is a passion in you that hasn’t been set on fire? Fire up your gift. Learn more. Develop it. Try it out. Take a risk. Develop your gifts for ministry.

If you don’t feel like you have an opportunity to use your gifts for kingdom work, this is your devotion today telling you, each believer has a gift and role to play in the building up of the church!  Don’t miss out. Fire it up. Play your part.

LISTEN TO THE PODCAST