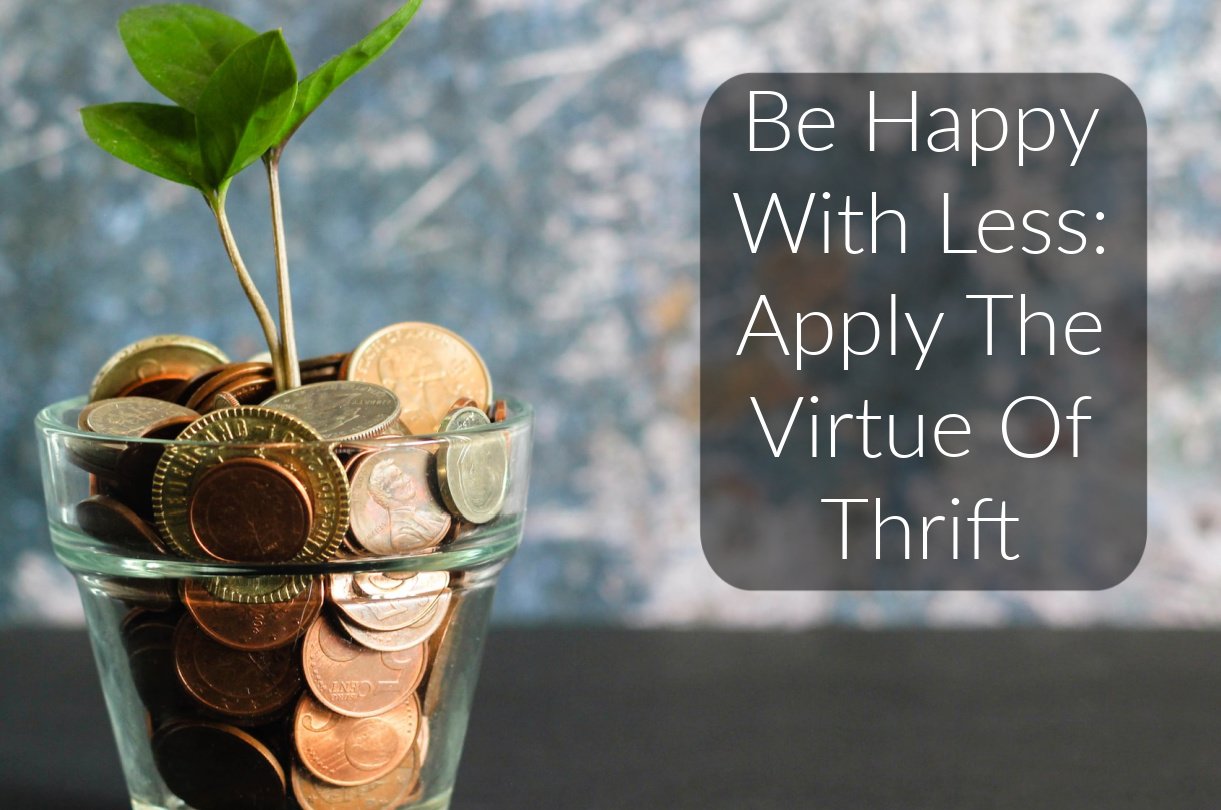 Financial hardships can bring extra stress in life. But financial freedom doesn’t bring enduring happiness either. How do we live so that the amount of money we have doesn’t keep us from flourishing?

Happiness with less isn’t just a good sentiment. It really is true that people who have less tend to have a level of happiness that eludes those who have it all. By choice or by force, they do so by applying the value of thrift.

According to Sonja Lyubomirsky in her book, The Myths Of Happiness, the word thrift originates from the word thrive. What we may think of as cheap or stingy is more about optimizing the use of limited resources.

Having limited resources is one of the biggest ways the value of thrift becomes natural to a person. It’s very difficult for children to grow up with a sense of thrift when their families live like they have unlimited resources. As Malcolm Gladwell states in his book, David and Goliath, every culture has a phrase along the lines of “wealth skips a generation.”

Without an attitude of thrift, we don’t learn these important values:

The harder we work for rewards, the less likely we want to squander them.

Practicing moderation and self restraint.

We avoid wasting time and resources on frivolous ones.

The author states, “These thrifty behaviors can make us feel happier, impart a sense of self-control, and foster success.” Kids who grow up with a thrift mindset tend to get better test scores, are less likely to have low self-esteem, and are less prone to addictions.

Negative Implications of Living Without Thrift

Not living with the value of thrift has psychological implications, such as becoming house-poor with a home purchase. Living in a bigger house with an amazing back yard gives an initial sense of pride and pleasure, but the pleasure wears off eventually. After awhile, we don’t notice the extra square footage, amazing deck, or updated kitchen. We adapt, come to expect it, and eventually seek bigger and better.

The negatives of being house-poor, including the strain of monthly mortgage payments and dealing with home-related issues, begin to overtake the relatively small pleasure that comes from owning a bigger house. The home’s newness, niceness, and bigness can’t come close to matching the downside and strain of ongoing financial obligation.

That doesn’t mean you have to move to thrive more – but it may! Moving to bigger and better won’t increase happiness, but in fact, may do the opposite.

Thrive in life with an attitude of thrift. Only buy what you can afford, help your children and grandchildren learn the importance of “work for reward”. Invest your money into things that count instead of possessions that will fade with time.