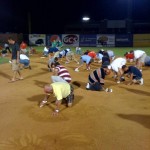 We were excited to use the Gateway Grizzlies tickets Ruby earned though the library summer reading program. At the end of the baseball game, all men who were interested, were invited to take a chance and dig for the remote to a new 52 inch plasma flat screen TV.  The remote was buried somewhere in the infield, one inch below. Each of us were given an eight inch plastic (and very flimsy) shovel and we all lined up in the field waiting for the signal.

It was a mad house when they said go!  Some guys were digging like crazy and moving place to place.  Others were staying in one place and digging deeper.  Because it was such a funny sight (and because I figured I wouldn’t win anyway) I stood up and took a picture of the whole situation.  Three or four hundred grown men, digging in dirt with little plastic shovels trying to find a TV remote.  The motivation wasn’t the digging, the motivation was the free large flat screen TV.

Seeing so many men earnestly digging and looking for something as small as a remote on an infield reminded me of the truth of this parable.  It made me think about how earnest we must be in seeking it.

“The kingdom of heaven is like treasure hidden in a field. When a man found it, he hid it again, and then in his joy went and sold all he had and bought that field. – Matt 13: 44