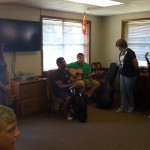 Joan has been going to lead music for a nursing home in Aliceville, AL every morning for twelve years. We had the opportunity to travel with this lady to provide music last week.

On this particular morning, after we had sung several songs, Joan asked one of the residents who had come down to watch the program if he would like to sing. He began to belt out “Near The Cross”  in a beautiful way.  Everyone applauded.

After he finished, Joan told us the story.  When he arrived at the nursing home, he couldn’t even talk, but through therapy, he has gotten to a point that he can sing!

I’m not sure if it was a regular thing, but for some reason on that day, Joan asked if anyone else would like to sing a song and she opened the floor. When she did, one guy up in the front of the room, began to sing How Great Thou Art.  He started it fast, didn’t leave many pauses in the song and projected the words louder and louder as he got to the chorus.  By the time he sang, “then sings my soul…” he was pushing up on the edge of his arm chair and belting it out.  It was inspirational to witness.

As he finished, another lady began to sing.  Her name was Unis, and as she started in a quite voice, everyone listened intently.  At one point  We spent an hour doing music there that day.  And as we finished up, I began thinking that I really didn’t have an end goal in mind for that morning.  I just figured we were going to share the Love of Jesus with this group of people.  But I guess I never asked the question, “how will we know if we were successful at that?”

Joan mouthed these words to me, “she has never ever sung before!” We could hardly get Unis to stop singing after that!  She kept on singing.

And even though I didn’t ask the question, the answer came anyway.  Singing broke out.  In the midst of what is sometimes considered to be a place of sorrow, joyful singing broke out.