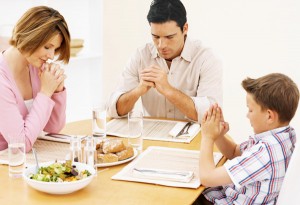 Scripture talks about praying before meals.  Jesus modeled it.  During the feeding of the 5000 he broke the bread and gave thanks for it.  Paul modeled it in a couple of other places throughout the New Testament.

I have always thought of it as an opportunity to be reminded.  We don’t really need a reminder to eat – we just get hungry and have food.  If we attach prayer to those times, and it become a habit, then we are praying, even if no other time, before we eat during the day.  It’s a reminder to offer thanks to God for everything we are blessed with.

Prayer before meals is also a forming time.  It can shape us.  I have been in countless homes where the man of the house will pray before the meal.  During the prayer – short or long – he makes a powerful statement of spiritual leadership, humility and thankfulness.

Here are some practical thoughts about prayer before meals:

1)  Lord’s Prayer:  For the last few weeks, we have written out the Lord prayer and prayed it during one of the meals during the day. Even the three year old is mumbling through the prayer learning it as she goes.  It’s the prayer that Jesus asked to pray and it covers it all.  It’s been a great experience.   Really, inviting kids and families to memorize any of the common prayers is a great way to create a habit.

2) Break a Fry:  There are times as we are sitting down with co-workers, friends or other people – where prayer as a group may not work out for some reason.  In that case, you are still invited to pray.  I heard a guy once say that he would take a piece of bread or a french fry, break it and offer in silence a brief thanks to God for giving his all for him.

3) Mute the TV:  I don’t know the exact percentage, but there are lots of people who regularly have meals in front of the TV or have a TV going in their kitchen. Mute the TV for a time of prayer even if it’s on the couch.  When we have decided to have a meal in front of the TV, we prayed in the kitchen before hand.

4) Take Turns Praying:  In our house, I pray sometimes, my wife pray sometimes, and my daughters pray sometimes.  I think it’s important to take turns to give everyone a chance to pray. Praying in unison might be something that becomes a standard.  There are times when the parent needs to pray.

5) Prayer in Restaurants – I know some families that sort of have an unwritten rule that we pray at home, but don’t worry about it at restaurants.  Our families norm is just to make it a little shorter at restaurants.  I typically offer a prayer every time I am out to lunch with someone – no matter who it is.  When our whole family goes out, or I’m out with a larger group of people, I’ll often suggest praying toward the beginning so that as people are ordering or getting up for a salad bar, there won’t be an awkward time of waiting on everyone to get their food.  Praying in public can be a witness.

6) Prayer on Special Days:  If there is a special day in your family or home, those times are great times of prayer before meals.  If you’ve invited everyone to your home for a birthday party or other event, pray together, especially for the ones being celebrated.  Pray for the new year.  Pray for the anniversary.  Pray for a special blessing for whomever’s birthday it is. When you have guests in your home, take time during the prayer before the meal to say thanks for them and bless them.

7) Take it Seriously – Prayer is not just cute or polite.  Prayer is powerful.  John Wesley was quoted saying, “Prayer is where the action is.”  It’s something that changes our lives.  There are things that will happen because we pray.

Praying before meals is a result of your “thanks” to Christ for all he has done and, at the same time, a catalyst for your gratitude.  Obviously, we can be in prayer at anytime during the day, but there’s something about the outward expression of praying before you eat.  It’s both a reminder to us live faithfully and a call to do so.

A great prayer for leaders to pray

Thank you for this…