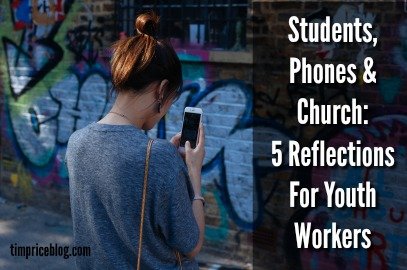 When Harvest first began, there wasn’t one cell phone among us on any trip or event. We talked, connected, and interacted face to face. Times have changed. 100% of the students who serve in Harvest and 75% of the students we serve at camps and conferences have a phone, a large percentage being smartphones.

I have a bit of guilt in my own little world, some of which I have overcome.  When I’m listening to sermons, I am much more likely to take notes right on my phone as opposed to handwritten notes.  I can actually read the notes when I’m done and they’re already stored and ready to go. Between looking at the bible app, taking notes and tweeting things that hit me, I’m probably looking down quite a bit during sermons, sessions and seminars.

That’s where the guilt comes in at times. I wonder if I’m missing too much trying to be engaged in both. I also wonder if I cause people to stumble, assuming I’m on my phone scrolling through Facebook or texting people while the sermon or worship is going on.

For those of us over the age of 35, there is a tension, for sure.

A quick “cell phone and youth ministry” google search will give you a wide variety of thoughts on students’ use of phones during church ranging from, “I don’t really notice or care” to “we take phones away from students during youth ministry meetings and events.”

Here are five reflections youth workers can consider regarding students, cell phones and the church.

Model What You Want From Your Students

Students do what they see. If you are always on your phone, then they will be too.  My own 1st grade daughter will find a phone and pretend to text – because she sees me do it. Today’s cell phone is like the gun holsters of the old west.  If one person pulls out their phone to check a text or the time or anything else, everyone around them will pull out their phones too.  Encourage your students with the cell phone rules, but then model the behavior. If you don’t want students to have their phones out during worship or student ministry events, be sure to print out your devotion and read from the Bible instead of reading from the notes on your phone, iPad or the Bible app.  People will take note if you are texting or liking photos during worship and they will follow suit.  The most mature people I know never seem to be interrupted by their phones.  They don’t take them to one-on-one meetings and they, in general, don’t seem to be overly tied to them.  Think about how you want your students to behave with their phones and model it. Additionally, model a faithful witness through your social media – it’s for all the world to see. We don’t want to be legalistic, trying to become someone we’re not, but your voice, as a leader, is powerful.  Watch what you re-tweet, how you comment, and what you are tagged in. You are a model to your students as you comment, share and engage.

Even with potential pitfalls, there are lots of benefits to inviting students to engage with their phones. During a student ministry meeting, students might text you a prayer request at a certain time before corporate prayer. Invite students to post pictures of meetings and events with a hashtag or filter. You could even scroll through after youth group (or delegate this) and do a drawing of one hashtagged picture each week.  There could be lots of witness happening as students let their friends know where they are and what they are doing.  Encourage your students to tweet a theme scripture verse for the night, or to text their small group of friends a particular verse of scripture to encourage them. Invite students to help you share and push information about an upcoming outreach event. Help them engage in ministry on their cell phones.  Since it’s part of their natural culture and communication, help them see how they can use it for good, encouragement and the gospel.  Students: 10 Ways to Live Out Faith on Twitter  |  11 Ways to Use Your Phone For The Great Commission

As important as it is to practice encouraging and engaging cell phone etiquette, we must also unplug. This can and must be taught.  It’s naturally difficult to disengage when we are so used to being connected, but the benefits, once experienced, are well worth it.  I have found that I have to unplug intentionally. There are many lunch hours or evenings at home that I leave my phone in the car.  When company comes over, I typically try to keep my cell phone in a draw in our kitchen.  When I’m meeting one on one with a person, I try not to even take my phone into the meeting. There are ways to unplug and times that we should.

I was at one church where just before the youth group worship and devotion time began, they did a cell phone “offering.” They passed around a big basket and students were asked to either place their phone in the basket or tuck it away not to be seen for the duration of their worship time together. This was a genius offering!  Offering our focus, our time, our eyes, our hands, and our ears to God for this moment.

I’ve heard of other churches who designate the small group time as the line. I think practicing being present in small groups without phones or devices is a huge benefit.  One church put masking tape on a table and created a cell phone parking lot, with several little rectangle shaped places for students to park their phones during small groups.

Highly social media connected students these days are developing slowly on traditional social skills – such as people’s reaction to what they are saying.  I read something from Jeremy Steele about this phenomenon. They have become so used to responding without seeing a face, they have lost the art of knowing when they have crossed the line, hurt someone’s feelings or misunderstood the question.  There isn’t space for immediate, non verbal feedback and that is hurting teenager’s social skills development..

We must find ways to help students understand the meaning of being apart, unplugging, and cell phone Sabbath.

A Great Concept: Eye Contact | The Night I Lost My Phone

Stick To The Rules

Since there are no official youth group cell phone rules for the world, be sure you stick to the rules you create. I have seen many churches with a “no cell phone policy” on retreats and mission trips.  Other groups allow the cell phones while students are traveling to and from the events, but they can’t be out during the event.  I’ve often thought we should set a no phone charger rule.  You can bring your phones fully charged, but once the battery is dead, you have to wait to go home to do anything else. That probably wouldn’t work too well.  A few years back, we were at Shepherd of the Hills in Arkansas.  The phone literally said, “no service” all day, every day of that event. These places are becoming fewer and fewer, but there are some camps we go where there is absolutely no cell phone signal. That’s a win win!

Your rules may have to morph from season to season, but if you have a no cell phone policy, stick with it faithfully. Be sure to let parents in on the rules for mission trips, camps and retreats. Let them know the alternate plan in case a student needs to connect back home, etc. Students will catch on to the high standard and discipline.  If you are on a mission trip, describe and detail out the importance of connecting with each other and with those we are serving. Invite your group to take notice of the people around them who are too absorbed in their phones to do so.  It’s an eye opener.

In Harvest Ministry, as we serve at children and youth camps, here are our three rules for cell phone use:  1) never on stage 2) never during meals 3) never in front of kids. This seems to strike a balance of plenty of time to communicate on the phone and some hard and fast times not to be on the phone.  Maybe I’m just old fashioned, but phones shouldn’t be out during meals with other people.

Become Comfortable As A Virtual Minister

This is the world we live in. It’s life. It’s a fact. There’s no reason for the church to shy away from it all.  Much like any missionary would learn to speak the language of the culture they are in, student ministry leaders must be comfortable in a virtual world. There are times you might need to hold your teens accountable for something they post. There may be times we need to intervene in relationships. Following students online might indicate some issues going on in their lives that may need a followup, personal conversation.  Students need real interaction, but they are living in a world of their phones more and more.  They would rather text than call.  They would rather scroll than listen. They would rather post pictures than interact with people.  If the church pushes it away, they come across as not being in the real word.  Don’t feel bad when you ask teens to put their phones away. Do so confidently. Don’t feel bad when you ask teens to help you with your phone – do so confidently (in fact this may be one of the best builders of connection and integrity regarding the issue). Become comfortable utilizing everything available to be a witness, to love as Jesus loved and to build disciples. READ: Why You Must Become Comfortable As A Virtual Minister

Everyone Wins When The Leader Gets Better

Do You Know The Best Kept Secret in Youth Ministry?