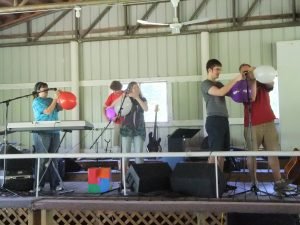 I know this isn’t scientific data, but it’s been my experience that the weight of days compound during youth events, camps, and conferences.  If Monday is valued as a day, then Tuesday builds on it and is actually worth a day and a half.  Wednesday is worth two and a half days.  Thursday is worth four days and Friday is worth about eight days.

There have been a few times when Harvest has led worship for a camp and one of the band members has had to leave a day early from the event.  Often, we will call someone else to come fill in the spot for the final day.  What I have experienced is that by the end of the camp, during the pictures, signings and hugs, the person who was only there a day is almost totally included, even more than the person who left.  I think it’s because each day is not valued the same.

Another example is in the hearts and attitudes of the kids…  the memories-are-huge-I-don’t-ever-want-to-leave-camp-this-is-so-awesome feelings so often talked about during the last sermon, are so heavy the last couple of days – you’d think they been there a month or more.  For the most part, students just don’t get to experience anything like the grace & love filled communities found during Chirstian camps and conference weekends.

I’ve said before, being at camp for a week is worth two years of Sunday School.  The waking hours at a weeklong camp might be approximately 110 hours – which would be the same amount of time if you met weekly for one hour of Sunday school for two years. (However, I do believe you need both – they have different functions).

It’s like a snowball effect.  And as far as leadership goes for camps and conferences, we can capitalize on the flow of the week in that way.

Here are some ways that Harvest does this:

1)  we plan naps, wal-mart runs, and laundry during the first or second afternoon of the camp

2) we make sure that we are available as camp is winding down for pictures, connections, goodbyes.

3) we adjust set lists so that we are able to join with the hearts of the people in worship  – what songs have clicked with this bunch of kids? how can we arrange them for maximum opportunity for responding in worship?

I think this concept may also apply to local church leaders. Study after study shows that longevity of a quality pastor is one ingredient for strong and healthy congregations.  It’s might be because ministry days compound.  The value of each day is important and becomes increasingly important as you serve.  Make the most of each one…  especially today.